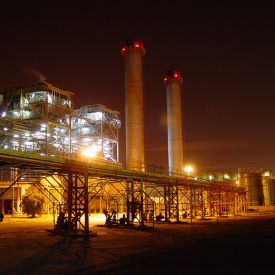 Shahid Medhaj Power Plant (Zargan) is located in 5th km of Ahvaz - Masjed Soleyman road in an area of about 45 hectares. Nominal Capacity of this plant is 418 MW. The plant has two steam units with nominal capacity of 145 MW each, and 4 gas units with nominal capacity of 32 MW each. With regard to the placement of Shahid Medhaj power plant (zargan) in the main ring of Khuzestan power grid, it plays a vital role in network stability and voltage control in the region. Shahid Medhaj Power Plant was purchased from the government in 2005; and this happened for the first time in the history of the country. So, Saba Group is considered a pioneer in this field.